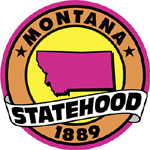 Montana is located in the west of the United States of America and there are several mountain ranges in this state. Sometimes people also refer to this state as the Treasure State, Big Sky Country, Land of Shining Mountains or The Last Best Place. In terms of area (145,552 square miles), Montana is considered to be the fourth largest state in the United States but in terms of its population it is considered to be the forty-fourth state in the country.

The economy of this state is basically dependent on hard rock mining, tourism, ranching, lumber, coal, oil and wheat farming. Montana attracts millions of tourists every year and these tourists like to visit the Yellowstone National Park, the Battle of Little Bighorn site and the Glacier National Park.

On the north of Montana there is Canada; on its southwest and west there is Idaho; and there is Wyoming on its south. There are many rivers in this state and part from these rivers Montana also has United States’ largest fresh water lake, the Flathead Lake. As the geography of Montana is diverse, its climate is also diverse. Most of the people living in this state are Christians, with the majority being the Protestants.