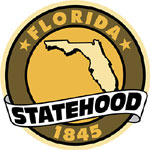 Florida known, as the ‘Sunshine State’ is one of the most popular destinations in the world, this is where one heads if in search for sun, fun and clear blue waters. Looking over the Gulf Coast, Florida is the gateway to the Caribbean with white sandy beaches and warm waters.

Orlando is the choice destination when looking for fun activities, with its theme parks Walt Disney World, the Magic Kingdom Park and Busch Gardens, these sites amongst others, offer an incredible number of entertainment facilities.

Tallahassee is the capital of Florida and is situated closer to Atlanta than Miami, giving it a more Southern character than the former, for Miami and its beaches provide a large range of sports, recreational activities, shopping centers, restaurants and bars both in the downtown area and at the art deco Miami Beach.

The Everglades National Park is the third-largest national park in the USA, with its expanse of waterways, subtropical saw grass prairies and tangled wilderness, most of the park is on water and aboard airboat one can explore the park and spot animals such as crocodiles and other bird species.

The Marco Island is nestled amongst the Ten Thousand Islands an area of striking beauty, stretching from Naples to the Florida Keys in a labyrinth of mangrove isles. Past here are the Florida Keys with their tropical climate, pristine beaches and turquoise waters.

Other cities include Tampa, Petersburg and Sarasota the cultural capital of Miami with its magnificent art galleries. Naples is also a popular seaside resort, while St Augustine is known as ‘America’s oldest city’

The climate offers long warm summers and mild winters, the coast is cooler in summer due to the ocean breezes.