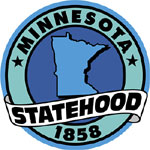 The state of Minnesota is one of the most popular outdoor tourist sites in the USA. After Alaska, it is the most northern state in the USA, boasting 55 state forests, 68 state parks and more than 12,000 lakes.

Minnesota is on the border with Canada and also borders with Lake Superior, which is the largest freshwater lake in the world. Other spectacular sites are the Minnehaha Falls and the Split Rock Lighthouse State park, where one of the best-preserved and splendid lighthouses stands.

Minneapolis and St Paul, the capital of the state, meet each other on either side of the Mississippi River, and are known as the Twin Cities. These towns were begun by the Scandinavian, Irish and German immigrants and today count a population of nearly three million.

The Landmark Center is the home to the Minnesota Museum of American Art, once the site of the Federal Court House; here some of the most notorious gangsters came to trial. St Louis also boasts a County and Heritage and Arts Center, known as The Depot, for it was once the Union Railroad depot, it now exhibits art from four different museums and is also a performing arts center.

Winters in Minnesota can get really cold especially in the north, with plenty of snow and ice. Summers are warm and ideal for all sorts of outdoor activities.