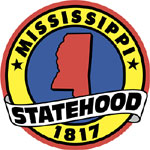 Mississippi, also known as the Magnolia state is in central USA, with its capital Jackson, this state offers landscapes of a great variety, from bustling cities to quaint small towns, from rolling hills to vast expanses, from tall pine forests to white sand beaches.

Here lies the Deep South, where the battle of the American Civil War was fought at Vicksburg in 1863. This is where in the 1960s racial persecution was at its highest. Artists of all types have been greatly inspired by the beauty of the land as well as its rich atmosphere, with the Mississippi River to the west and the Gulf of Mexico boasting long stretches of sandy beaches.

An spectacular site is the historic Natchez Trace Parkway, this route winds through 640 km of scenic land, from Nashville through to Tennessee, Natchez on to Mississippi, without billboards or commercial traffic to disturb the traveler following the route where the Native Americans, frontiersmen and buffalo once took.

Tupelo is the birthplace of Elvis Presley, where he was born in a humble two-room house; here there is also a museum with rare photos, memorabilia and a statue of ‘the King’.

Summers in Mississippi are hot and humid and winters are short and mild, with temperatures cooler in the north and milder on the coast.