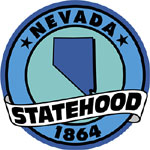 Nevada is a state that is situated in the west side of the United States. The world-famous Las Vegas is the largest city in this state and its capital city is Carson City. This state has been nicknamed as the Silver State because of the silver deposits that were discovered and mined in Nevada. In terms of area, Nevada is considered to be the 7th largest state in the United States.

The U.S federal government owns about eighty-six percent of the land here. In the 2008 census, it was found that there are about 2.6 million people living in Nevada and of this number; more than 4/5th of the people are living in the metropolitan cities like Reno and Las Vegas.

The Spring Mountain Range, which is situated on the west of Las Vegas, is the largest mountain range in the south of Nevada.