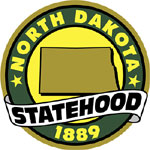 Fargo is the largest city in the state and its capital city is Bismarck. Fargo and Grand Forks are locations where the primary public universities are situated.

The western side of North Dakota includes the northern part of the Badlands and the hilly Great Plains. White Butte is the highest point in this state and it stands at about 1,069 meters.

Majority of the people living in North Dakota are generally Northern Europeans. Some of the major ethnic groups in this state are Native American, German, Swedish, French, Irish and Norwegian origins.

North Dakota is said to have most churches per capita. About thirty-five percent of the people living here are Lutherans and the Roman Catholics comprise of about thirty percent of population.

There are other non-Christians religions that are also followed and they are Buddhism, Islam, Judaism and Hinduism. All these four religions constitutes about 4% of North Dakota’s population.