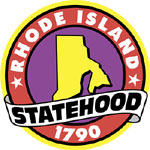 Rhode Island is an American State that is located in the New England region of U.S.A. On the east and north of Rhode Island there is Massachusetts and on its west there is Connecticut. Even though its name is Rhode Island, the majority of the state is actually on the mainland.

Sometimes, this state is also unofficially known as Little Rhody. Its official name is Rhode Island and Providence Plantations and this is the longest official name among the states in the United States.

The state is about 4,002 square kilometers in area and it is bordered by the Atlantic Ocean on the south. On the west Rhode Island, there is Connecticut and on its east and north there is Massachusetts.

Rhode Island is also known as the Ocean State and there are many ocean front beaches here. The state is basically flat and it does not have real mountains.

Jerimoth Hill is the highest point in Rhode Island and it stands at just eight hundred and twelve feet. Most of the people living in this state are from six ethnic groups and these are Italian, English, Hispanic, Irish, French Canadian and Portuguese.

Roman Catholicism is the main religion that most of the people in Rhode Island follow.