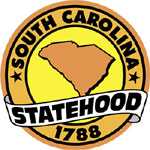 South Carolina is a state that is situated in the United States. On the north of this state there is North Carolina, on its east there is the Atlantic Ocean and on its south and west there is Georgia. It previously belonged to the Province of Carolina.

According to the 2008 census, it was found that South Carolina has about 4,479,800 residents and the state is the twenty-fourth largest state in United States. Columbia is its capital city and this state has forty-six counties.

The coastline of South Carolina includes many estuaries and salt marshes. There are also few natural ports along its coastline and Charleston and Georgetown are two of such ports.

The climate in South Carolina is subtropical in nature. The days are hot and humid during the summer while the nights are cooler. It is not common for this state to get snow during the winter months.

The tropical cyclones sometimes strike South Carolina. Majority of the population living in South Carolina are Christians (about 92%) and most of them are Protestants.