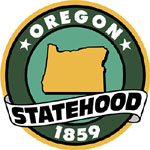 Situated on the Pacific Northwestern part of the United States is the state of Oregon. It lies on the pacific coast with Idaho on its east, Nevada on its southeast, California on its south and Washington on its north. The northern and eastern regions of Oregon are separated by two rivers and they are the Snake River and the Columbia River.

The most agriculturally productive area in Oregon is the valley of the Willamette River, which is located in the western Oregon. In the year 2000, it was reported that there are about two million people living in this state.

Oregon only has one national park in its state and it is the Crater Lake National Park. Of the forest fires in the country, Oregon tops the list as the leader in forest fires.

There are seven geographic regions in Oregon and they are the Oregon Outback, the Columbia River Plateau, the Klamath Mountains, the Cascade Mountains, the Rogue Valley, the Willamette Valley and the Oregon Coast.