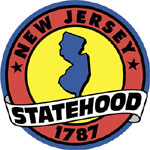 This state is considered to be the most populous state in the country and it is also the state with the second highest median income. The state can be divided in to three geographic areas: South Jersey, North Jersey and Central Jersey.

Some of the important rivers in New Jersey consist of Toms, Rahway, Delaware, the Hudson, Hackensack, Mullica, Passaic and the Musconetcong Rivers.

One very famous recreational beach in the State of New Jersey is the Sandy Hook and this is located along the eastern coast. There are many good recreational beaches in Long Beach Island too. On the northern tip of the state, there is the Barnegat Lighthouse.

Of all the states in the United States, it is believed that New Jersey is the most diverse state in terms of the ethnicities well as the religions of the population.

The main ethnic groups that live in this state include the Irish, Italian, Polish, German and African. There are many Asians living in New Jersey as well.